Prestige Tickets - and use it for a separate research branch, which offers great progression boosts through increased rarity and drop frequency of loot.

In order to gain access to the entire Prestige research branch, the player must reset their quests at least twice. This can be done by selecting any level, clicking on the crown button on the right and confirming: 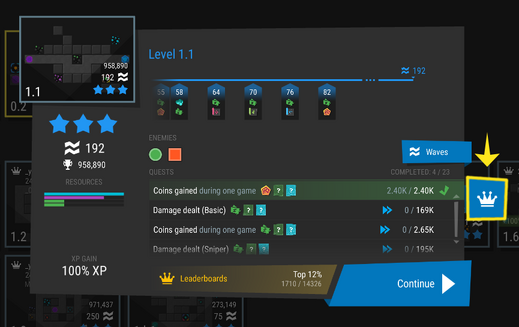 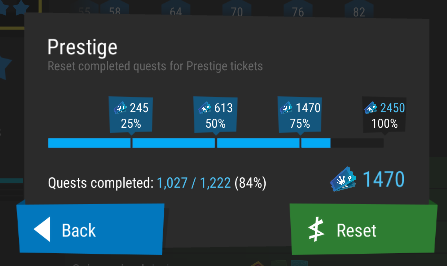 Upon resetting the quests, the player will receive up to 1000

Prestige Tickets (affected by Prestige drop rate), depending on the progress. Quests can only be reset if the total progress is at 25% (306 quests as of v1.8.6) or higher. Progress milestones do not matter for research requirements. It is recommended to either reset twice at 25% or once at 25% and then at 100% for the Master trophy. Quest resets should not be used as a source of

Prestige Tickets, as they are extremely inefficient in comparison to selling maps.

Prestige Tickets. The amount of tickets gained depends on the number and quality of tiles used, average portal difficulty, Prestige drop rate research and other specific conditions.
When editing a map, this appears near the top left corner of the screen:

How To Sell Maps

To sell a custom map, it has to be played first. When entering a game on it, this appears on the interface:

This number shows the score required for the maximum bonus multiplier at the end of the game. Achieving it should be prioritized over any other requirement. Once the game is finished, the map selling menu can be opened by clicking on the dollar button on the right: 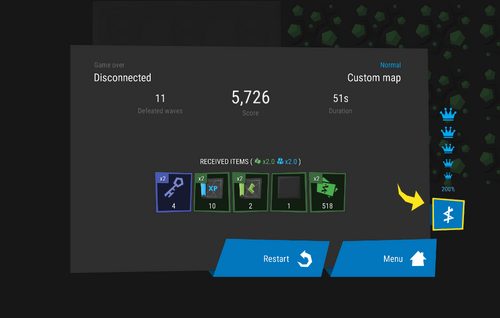 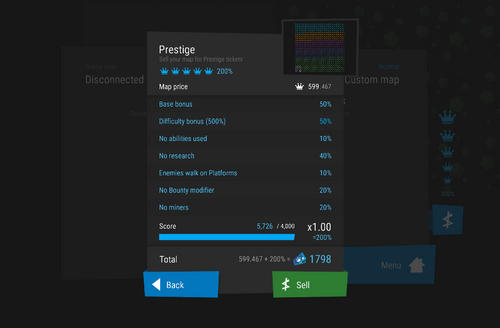 After clicking the "Sell" button and confirming, the player will receive

Prestige Tickets. All tiles used in the map will be permanently deleted from the inventory.

While disabling research greatly increases the bonus for selling maps, it also makes reaching the score requirement significantly harder. The Crusher method, shown in detail in this video, takes advantage of Crusher's high base damage to reach the score requirement with no research and at high difficulty, while requiring very few tiles to set up.

With high enough loot frequency, even a single run can yield so many tiles that the player will have to spend more time building and selling custom maps than actually playing. For players with such problems, it is much more efficient to sell tiles for

Prestige Dust instead of creating maps.

Tiles can be sold from the main menu's inventory, in the map editor tab. To select a group of tiles, the player must click and hold it for 1 second. Selected tiles can be sold by pressing the "Prestige" button. 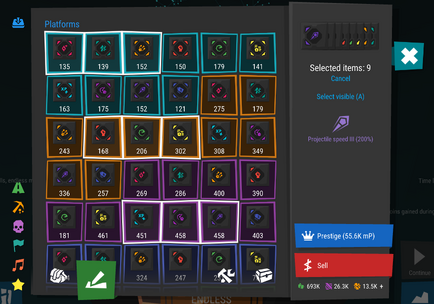 Random tile packs can also be sold in the inventory's packs tab. The amount of

Prestige Dust earned is equivalent to 25% of the tiles' base mP value and is not affected by Prestige drop rate.

Prestige Dust can be crafted into

Prestige Tickets in the inventory's crafting tab. Each ticket requires 1175-1500

Green Papers to craft, depending on the crafting discount research.

To help reduce memory usage, each run can yield no more than 500 different items (multiplies of the same type can still be earned). After earning 250 different items, each next one will have a 50% chance to automatically convert into

Prestige Dust, if possible. After earning 500 different items, this chance will increase to 100%.

Community content is available under CC-BY-SA unless otherwise noted.
Advertisement